I’m attending the 35th Hikanation reunion in Estes Park this weekend. Two years after the American Hiking Society was formed in 1976, the new board wanted to create a little splash and do something memorable to announce our arrival. The idea of hiking across America seemed perfect, and I volunteered to organize it. 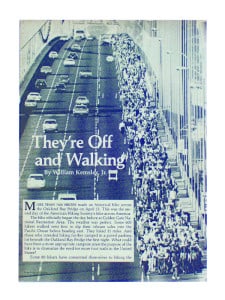 The project was two years in planning, but in April, 1980, about 75 people left Golden Gate Park in San Francisco to hike to the steps of the Capitol in Washington, D.C. Fourteen months and 4400 miles later, a hardy band of hikers left Harpers Ferry, hiked down the C&O Canal bank, up the green, past the Washington Memorial and stood on the steps of the Capitol where the Coast Guard Band heralded their arrival. The demands of the hike gave the group a rag-tag appearance, but many of them were shouldering state flags that waved briskly in the bright sun. After speeches and a dinner later that evening, most of the group hiked on to Cape Henlopen to dip their boots in the Atlantic.

The group has stayed together all these years and is meeting at Marys Lake Lodge on Friday and Saturday. Fifteen to twenty hikers will be there with their families to reminisce.

Gudy Gaskill, now in her early 90s, living in Golden, Colorado, the founder of the Colorado Trail, who greeted the hikers in 1980 as they crossed Colorado, will be there to greet them again this weekend. As will I. Larry Luxenberg, board member of the American Hiking Society and Hiking Trails for America will join us.

The idea of an east-west trail from ocean to ocean germinated as a result of Hikanation and the American Discovery Trail was born. A cadre of devoted hikers has been seeking to add the ADT to the National Trails System. More at www.hikanation.com and www.discoverytrail.org.