I recently had an e-mail exchange with Jim Wolf, founder of the Continental Divide Trail Society.  My response fleshes out the mission statement of Hiking Trails for America, so I wanted to share it with our readers.  (See correspondence below.)

Hi Jim —
Thank you for the link and your kind remarks about the trail I love.
To be sure, there are gaps in establishing the CDNST as a nonmotorized hiking trail, but this is more often an issue of topography or bureaucratic procrastination than it is to land tenure issues. In all of Montana and Idaho, there is only one mile that I regard as a critical section that needs to be acquired either in fee or by easement. In Wyoming, the main concern is the checkerboard railroad grant north and south of Rawlins. In Colorado, a critical need is relocating the CDT off a 10-mile stretch of paved highway. We have some thoughts about a realignment of the Trail south of Grants, New Mexico: a key parcel for this purpose has been identified for acquisition by BLM from a willing seller.
My point is that we may achieve more by working with landowners (relatively few in number)  to obtain rights-of-way (with federal or private funds) than to raise the specter of condemnation.
Moreover, CDTS has not called for a complete ban of mountain bikes along the route. We would not allow them, however, if their use on particular sections (generally, having special scenic or natural values) would substantially interfere with the nature and purposes of the trail. Some other national scenic trails allow, or even welcome, mountain bikers as a matter of course.
Personally, I subscribe to your vision of trails for hikers (and, in the case of the CDT, horsemen) — but I do question whether a campaign that implicitly contemplates acquisitions by eminent domain and the total prohibition of mountain bikes is the way to go.
Best regards,
CDTS/Jim Wolf 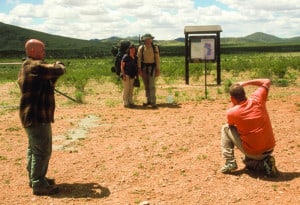 “Hartwig and Beatrix Ahlers arrived from Germany the night before to begin their trek from near Hachita, New Mexico, to the Canadian border.”

It sounds to me like you have a realistic shot at completing the CDTNST through “negotiation and private-public partnerships.”  I wish you the very best in pursuit of that goal.  Parcels of remote land in the east are generally smaller than those in the west, which makes an acquisition program more challenging.  On the other hand, I suspect there is a stronger property rights ethic in the west where “good fences make good neighbors.”  Time will tell, and in that regard you might have more time to close gaps than hikers have in the east.  Wide-open spaces will fill up more gradually.

That being said, there are statistics that come from the Appalachian Trail acquisition that trail clubs would be well advised to respect.  When the A.T. was finished, about two-thirds of the trail was on public land.  This meant that about 700 miles had to be acquired.  It took over 30 years and about $200M to get the job done.  There were 2550 separate acquisitions, making it the largest acquisition effort in the history of the Park Service.  But now the right-of-way is continuous … forever.

It is interesting to note that about 400 of those acquisitions required the use of eminent domain.  Most of them were not adversarial, but the process was required to secure title, in part to determine who would receive payment.  About 100 could be called adversarial.  That’s one out of every 25 acquisitions or one per seven miles.  It’s hard to believe that other trail acquisition programs around the country will be able to do substantially better than that.

Perhaps the more important question concerns money: how soon can we get it and how much?  In the budget just passed, we learned there was $28M set aside for development of our National Trails System.  The National Historic Trails don’t have a problem with continuity.  No doubt much of the funds allocated to these trails will be put into infrastructure.  I hope the funds allocated to the National Scenic Trails are put into acquisition.  That sum amounts to $12M.  A friend close to the National Trails System called it a “sweet first step.”  I disagree, particularly when I look at the funds our one trail absorbed.  These are crumbs from the table when we consider the job that needs to be done.

I am all for beginning with the money first and seeing how far we can get.  Keep in mind, though, that such was not the order of priorities in the 1968 National Trails System Act.  Congress granted eminent domain to the A.T. and the real money came much, much later.  I am suggesting that we need $50M per year for two or three decades for right-of-way acquisition alone, and we need to get going, particularly in the east and in California.

We have a story to tell that conservatives and liberals alike can sign off on.  Government pays for the right-of-way, but volunteers, for the most part, maintain the trail.  Seventy percent of the A.T. Conservancy budget comes from the private sector.  The balance comes from management contracts the ATC signs with the federal government.  The trails, in turn, are open to every hiker.  It’s a great story to tell.

So what is the first question to ask?  It’s not about eminent domain.  It’s not about how much money we need.  It’s this: How do we close the gaps in the National Scenic Trails so they are continuous from end-to-end?  How can we keep our wilderness foot-trails in the wild?  That’s the subject for national discussion.  Keep in mind, we are only addressing here 10 National Scenic Trails, jewels in the National Trails System.

Hiking Trails for America would be pleased if Congress would create a commission to address this question.  I hope that you, also, can support such an idea.  A debate over the question would serve two purposes.  1) It would bring a broad spectrum of folks into the discussion and 2) Legislation that emerged as a result of the discussion would set us on the path of finishing the job. 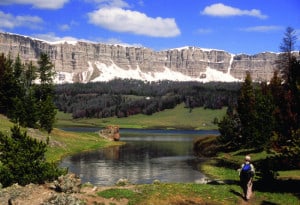 “The CDT comes around the west side of Brooks Lake, WY.”