BRITAIN’S health department calls it “the silent killer”. Others have labeled it “the new smoking”. Lack of physical activity has crept up the list of global causes of death to fourth place, after high blood pressure, smoking and high blood sugar—not least because it helps waistlines expand.

Even a little exercise has a huge health effect, whether or not people shed their extra pounds. Research presented on August 30th at a cardiology conference in London suggests that walking fast for 25 minutes a day can buy three to seven years of extra life. A bigger study by a team at Cambridge University tracked 300,000 Europeans over 12 years, and found that a brisk daily 20-minute walk, or the equivalent, cut the annual death rate for people of normal weight by a quarter, and for the obese by 16%. Getting everyone sedentary to do this would save twice as many lives as ending obesity, says Ulf Ekelund, the lead researcher.

Walking 20 minutes a day falls just short of the minimum exercise that the World Health Organisation (WHO) recommends. Adults, it says, should do at least 150 minutes weekly of moderate exercise, such as walking or cycling (to the point when “you can still talk but you can’t sing the words to a song”, as Britain’s National Health Service helpfully clarifies), or 75 minutes of a more vigorous kind such as running or swimming. Adolescents need at least an hour a day.
On these measures, much of the world falls short. A comparison that adjusts for differing age profiles puts Colombia and rich parts of the Middle East at the top of the world couch-potato rankings (see chart). The Dutch, Europe’s keenest cyclists, do far better.

Dangerous streets and restrictive cultural norms mean that almost everywhere, women are the sedentary sex. Many avoid walking, particularly after dark, and activities such as cycling and street football are often men-only. Just a fifth of 11- to 17-year-olds globally do the minimum recommended for their age, and even where that share is rising, including in Germany, France and the Netherlands, most youngsters move far too little. The voice of the sluggard, it seems, is only going to grow louder. 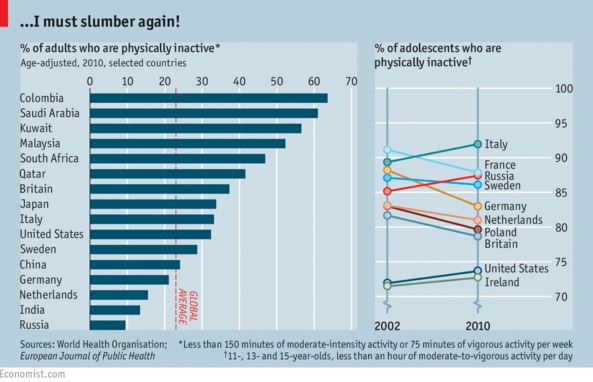